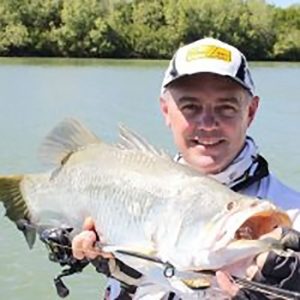 Anyone in the Boating, Camping and Fishing World will most likely be familiar with the name Steve Doyle. Steve was the founding General Manager of the Retail Store Chain BCF in 2005. Steve’s journey involved the initial research and development of the business model for the BCF stores, the creation of the business and launch, through to numerous acquisitions and the ongoing evolution of the company to employ over 2500 team members and turnover over $550 million. So I think it is safe to say not only is Steve, a successful businessman, he also knows his stuff when it comes to Boating, Camping and Fishing.

Steve is also a well-known in the fishing industry as a fisherman and has recently launched his fishing website www.thenomadicfisherman.com.au The Nomadic Fisherman sums up all that Steve loves about fishing, it’s his passion.

“I live at Bribie, so it’s my backyard, and I understand the waters and what I might catch at a certain time of the day”, Steve told us when talking about the marlin he recently caught off Mooloolaba. “It was about 40 or 50 kilos, so not the biggest marlin, but they certainly perform. It’s like catching a barramundi, there is lots of action, and you can get some great photos before you release it and it swims away”.

In the world of BCF, Steve did get to test all of the latest products, so he is a wealth of knowledge and experience when it comes to knowing what to use and when to use it. Naturally, along with his passion for fishing comes a love of camping, they go hand in hand. So it would be safe to say that over the years, Steve has tried and tested most of the camping equipment on the market. Along with the fact that in his current consulting role, Steve is working daily with people who camp regularly and have real-life experience using all of the products available.

We gave Steve a call to find out what he knew about caravans, and this guy really knows his stuff! Steve was only too happy to speak to us, what a great guy, with such genuine enthusiasm about the outdoors, it was a real pleasure to talk to him.

Steve’s plan when he retired from life at BCF was the travel Australia with his wife. It hasn’t quite happened quite like that yet, as he now works across the industry in a consulting role; however, long term, the plan remains the same – to explore this great country.

Steve explained that he began his initial research into purchasing a caravan at the Brisbane Caravan Show. He narrowed it down to three he really liked and felt would be appropriate for his big trip. He spent lots of time of forums talking to people about their experiences, as well as speaking to his many contacts from years of working in the industry. His main criteria were, the new van must be robust and must be a quality build. Originally Steve was not going to custom build a van and had heard of Spinifex on some of the forums he had been talking in. Steve visited the Spinifex showroom to view a van they had on-site, to see exactly what it was everyone was raving about.

Steve explained that the level of service he received from that very first meeting at Spinifex was second to none. He was shown through the van on-site; the team there talked him through the features of the van and the level of customisation that was available if he chose to build himself. Steve was sold! Once he knew he could get a van to the exact specs he wanted and with all of the extras he needed such as additional fridges, extra water capacity, air-con upgrade….. he began work with Spinifex on the design and build.

“Spinifex worked with me right through the whole process”, Steve said. “They were able to offer alternative ideas and solutions where needed, and from the start, right through to delivery, nothing was too much for them.” Steve told us that a few minor issues after delivery were fixed without question, “Spinifex is booked out for builds way in advance, which says something about the supply and demand for their products!”

“In the world of caravanning Spinifex are a niche market”, Steve said, “But if a custom build is what you want, they are the top choice in vans. Not everyone needs a caravan with off-road capability, and I haven’t even used mine nearly as much as I planned, but it’s coming,” Steve told us. Steve currently uses his Spinifex van for shorter annual leave trips; however, his big trip around Australia is still on the cards in the next few years when he hopes to retire. “It’s a large van with huge capabilities!”